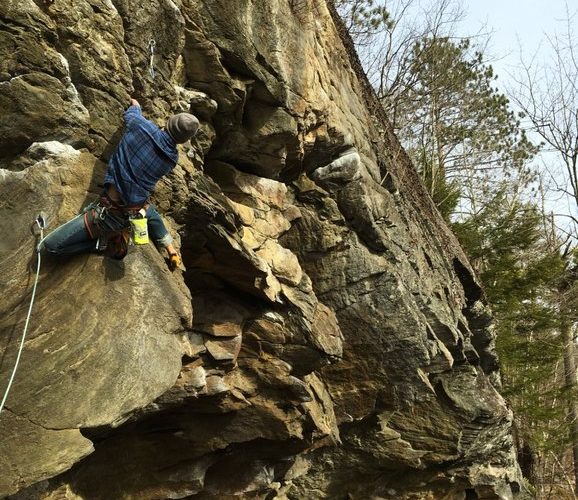 When To Go Camping & Rock Climbing in Rumney, New Hampshire

The Plan That Pretty Much Failed Us

We originally were planning to go to Great River Gorge, West Virginia to camp and rock climb since it was further down south and had warmer weather. Unfortunately, after checking the weather, we decided to change our plans last minute and go rock climbing in Rumney instead because of an impending rainstorm to West Virginia.

Here’s the first mistake we made: New Hampshire is COLD during this time of year, and it often snows. Furthermore, most campsites don’t open until the weather permits, so we were stuck with only one option: Mountain Pines Campground.

I think we would’ve thought twice about going to rock climbing in Rumney for Spring Break if we had found the history of their weather beforehand. There’s this helpful tool that David came across that helps you look into that called Wunderground. There are lots of cool features that you can play around with that tell you the weather history for a particular area. 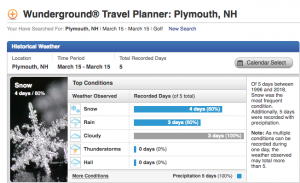 As you can see, the area around Rumney during the time we went to was recorded for consistently having snow and rain. We clearly did not pick the best week to go rock climbing in Rumney! 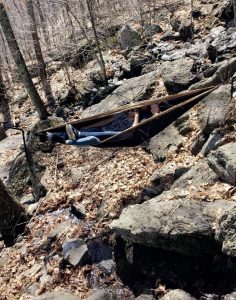 David and Shelby chilling in a hammock outside.

As you could predict from those statistics, it was cold, wet, and we even had one day where it snowed. These conditions don’t result in the best kind of camping. During the day, the weather wasn’t freezing. But, at night, temperatures would reach a low of 20 degrees Fahrenheit and most of us came underprepared. We stayed at Mountain Pines Campground, which had just opened for the season. Therefore, none of their outdoor showers or bathrooms were open for use because the pipes were still all frozen.

While we don’t suggest camping during early-mid March in Rumney, New Hampshire, I’m sure there will be some of you out there that still want to go! In an attempt to prevent you from making the same mistakes as we did (and from being miserable at night), here are a few tips:

1. Bring a lot of layers

You should be wearing layers on layers on layers at night. Just be careful it’s not too much to the point where you’ll sweat. Sweat will inevitably cause you to become cold again…so that’ll defeat the purpose of all those layers! Bring extra mid-weight, base layers, and thermals, such as Under Armour. Tight clinging clothes help keep your body heat in. Additionally, bring lots of socks, specifically ski or soccer socks.

If you are staying somewhere where there’s a threat of inclement weather, bring a rain poncho, plastic bag, rain jacket, or a breathable shell to help deflect the elements.

For example, I am always cold. During that trip, I had a sleeping bag that wasn’t made for the temperatures we experienced. Make sure you’re equipped with a 0-20 degree sleeping bag to ensure you don’t keep waking up frozen! You should also make sure that your sleeping bag is a mummy bag that tightens at the top with only your nose peeking out.

Make sure you have an insulated sleeping pad, such as the Klymit Statik v2. It’ll not only help you sleep better, but will prevent you from being too cold during those brisk nights. We use this brand all the time when camping outdoors and they work amazing!

4. Put hot rocks in your sleeping bag or tent.

Put hot whats where?! You heard me! Take some of the rocks that were roasting around the fire and stick them in your tent or sleeping bag to get a little bit extra toasty! Make sure you wrap them in a shirt so they don’t burn you or anything else in your tent. Also, use caution when picking them us as they are generally incredibly hot. If you don’t have access to a fire pit, you can boil hot water and put it into a water bottle to transfer the heat.

Rock Climbing Our Way To Warmth

Although David has been outdoor rock climbing many times before, this was my first time. It’s absolutely amazing to be able to rock climb in Rumney on REAL rocks and an experience I definitely suggest for all of you bucket-listers out there!

During the trip, we mainly did sport climbing and top-rope climbing. So if the rope is at the bottom in sport climbing, how do you get the rope to the top to safely climb down? We used a technique called lead climbing.

Top rope climbing is when the climber is attached to a rope that loops through an anchor system at the top of the climb. A belayer is responsible to get rid of the slack as the climber ascends.

Once everyone is done climbing, at least one person in the group must lead climb a route and clean it. To clean a route, the climber must climb up by attaching to the clips that are bolted into the wall and then repelling themselves back down and unclipping the quickdraws along the way.

Many climbers have a tendency to leave ‘treasure’ behind on the routes they either attempt or fail on, called ‘bail-beaners’. It’s usually a carabiner that the climber had to bail themselves out on. David obtained a ‘treasure’ during an outdoor climb a while back. It’s one of his favorite quickdraws because he feels like he actually earned it!

Rumney, New Hampshire is known for its crags and rock, known as schist. Rock climbing at Rumney offers aretes, grooves, dikes, corners, and cracks, making it a perfect climbing destination for many people. Bouldering is also offered at Rumney! Most of their routes range in the 5.9-5.11 range.

While rock climbing in Rumney, you’ll notice that a lot of the routes have fun names accompanying them too! Some favorite sport climbs include Armed and Dangerous, and Off My Medication (Location: Main Cliff, Left), Waimea (Location: Waimea), Peer Pressure (Location: Bonsai), Flesh for Lulu (Location: The Meadows), Apocalypse Later (Location: Apocalypse Walls), and Captain Hook (Location: Orange Crush).

David lead climbing Yoda’s Crack…no really! That was the name this climbing spot. In this section of Rumney, all the routes had a Star Wars theme. 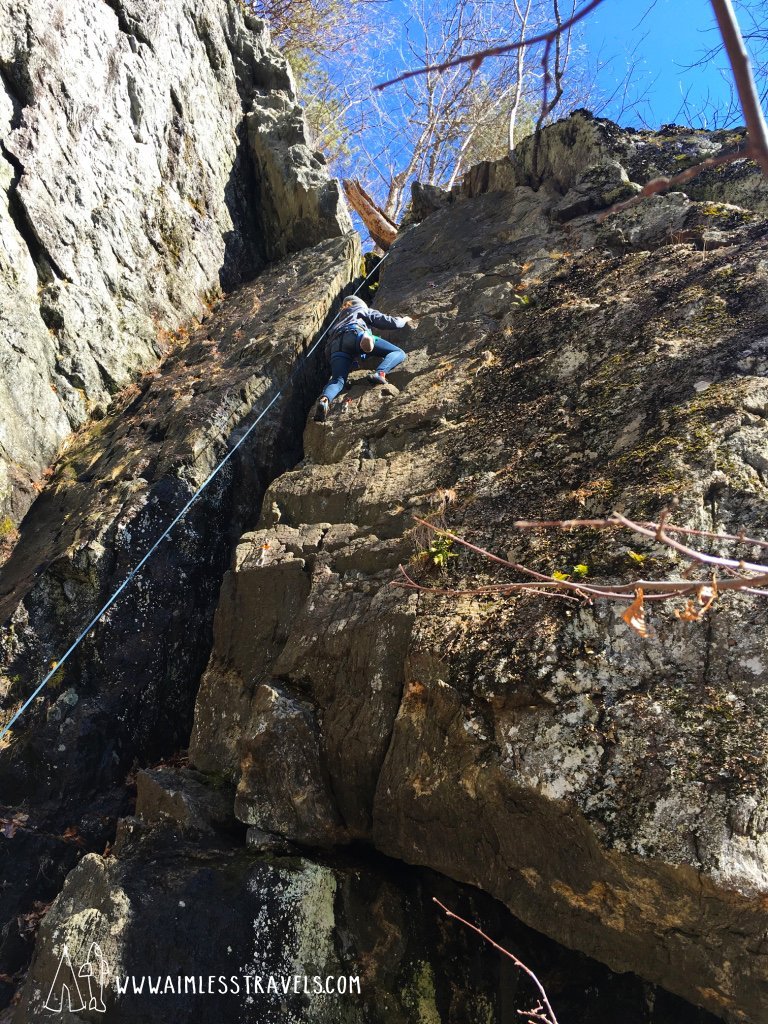 Shelby’s first outdoor climb. She also had the best belayer ever…This was an example of a top rope climb. 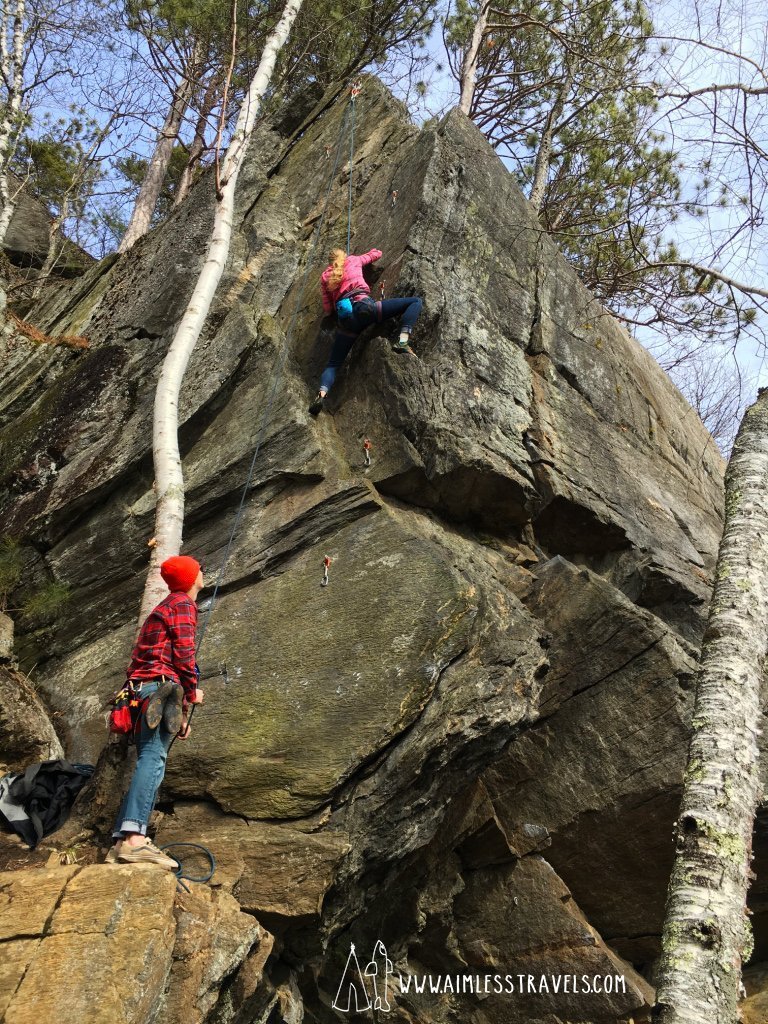 What Do You Need?

You need someone who is a certified belayer. This is pretty much the person who pulls the slack in the rope as you progress up the mountain (a.k.a your lifeline). You can usually become a certified belayer at an indoor rock climbing facility by taking a class. Both David and our other friend, Tyler, are certified!

Proper rock climbing shoes are essential. Make sure these shoes are only worn for rock climbing as walking in them can ruin them. Shoes come in a lot of different styles, each having their own perks. If you’re an expert climber, you are more likely to have a pair of shoes with sharper points and curved arches, which allow you to get into small crevices while climbing. If you’re new at climbing, I’d suggest going for the more comfortable style shoe with a flat bottom. Some shoes we used throughout our trip were La Sportiva Tesstarosas, La Sportiva Finales, Tarantulas, and Mythos. 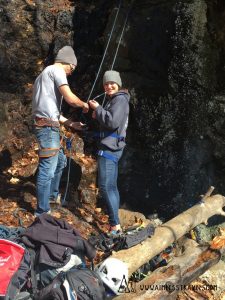 You’ll definitely need a climbing harness unless you’re planning on bouldering. You’ll also need a belay device to make sure your belayer can control the rope…and control your life!

Carabiners are important to connect the climbing rope to pieces of protection and can also be used as quickdraws when lead climbing.

Of course, we can’t forget to bring the climbing rope, possibly the most important piece of rock climbing gear! Without a well-tested climbing rope, our safety would be at risk.

When Is the Best Time to Go Rock Climbing in Rumney, New Hampshire?

Remember that fun website, Wunderground, that I recommended? It also has another really cool feature. The site gives you recommendations, based on the weather when it is the best time to do an activity. In our case, we just plugged in rock climbing in Rumney, New Hampshire

The best time to go rock climbing in Rumney, New Hampshire is from June to August, with the peak being in mid-August.

Overall, we would probably be willing to go rock climbing in Rumney during this time of year again in the future. However, we would not go camping again. The nights were too cold and wet, and we’d personally enjoy warmer and drier weather to go camping.

Although it may sound like we were miserable, it was actually a great time! We made the most out of our experience. A few of our favorite moments were when we played Truth or Dare. One of the dares was to a friend of ours to run naked on the highway that was right across from the campground. Let me put this into perspective for you: It was about 2:00 am, pitch black, in the middle of nowhere. You’re driving your car on a dark and quiet road when, all of a sudden, you see a naked kid, in sneakers, jogging at a respectable pace on the opposite side of the road. It was quite the scene to behold!

On the last day, it started to snow. Conveniently, our friend, Tyler, locked his keys in the car. Even more conveniently, there was no cell service since we really were in the middle of nowhere. No one was at the office for the campsite, either. So, Tyler had to go to the highway and attempt to stop drivers to have them drive to spot where they had cell service and call the cops for us. Eventually, thank God, a cop was able to come to assist us (and our frozen asses!). 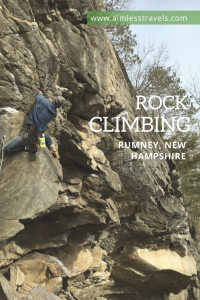