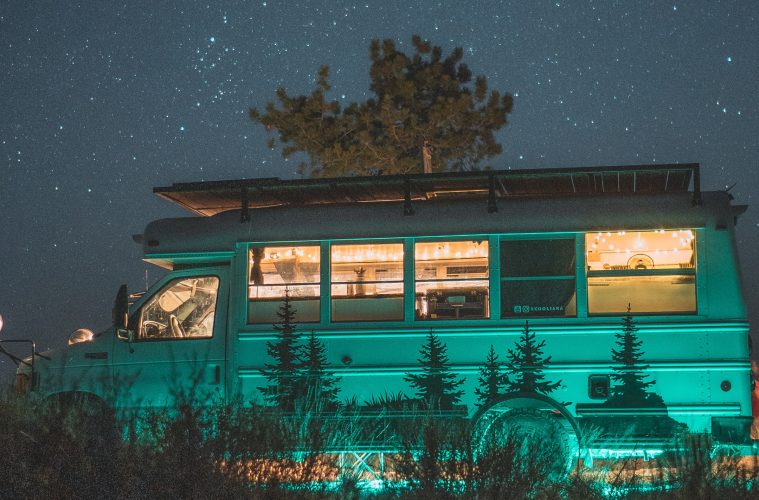 There is just something about a mini skoolie conversion that’s so appealing, including its compact size! Julie and Isaac from Skooliana built one of the most beautiful short buses we’ve seen, both inside and out.

In this article, we’ll dive into the Skooliana bus conversion and their story!

Tell us about the rig you had before Skooliana and why you ultimately chose a short bus.

When I (Julie) met Isaac, he had just got finished with building out a 1995 Chevy G20 and was living in it full-time. When we starting dating, I moved into the van with him. With both of us being in the van nearly 24/7 it was just too small. We had hardly any room.

After a few months of contemplating, brainstorming, writing down the pros and cons multiple nights on end, we decided it was time to upgrade to a larger space. We really fought between wanting a Sprinter and wanting a Skoolie. The reason we ended up choosing the short bus was because of its size. The width and windows were awesome! We had stood in multiple sprinters in the process of looking for a new home and the second we stepped into a mini skoolie, we knew it was what we wanted. 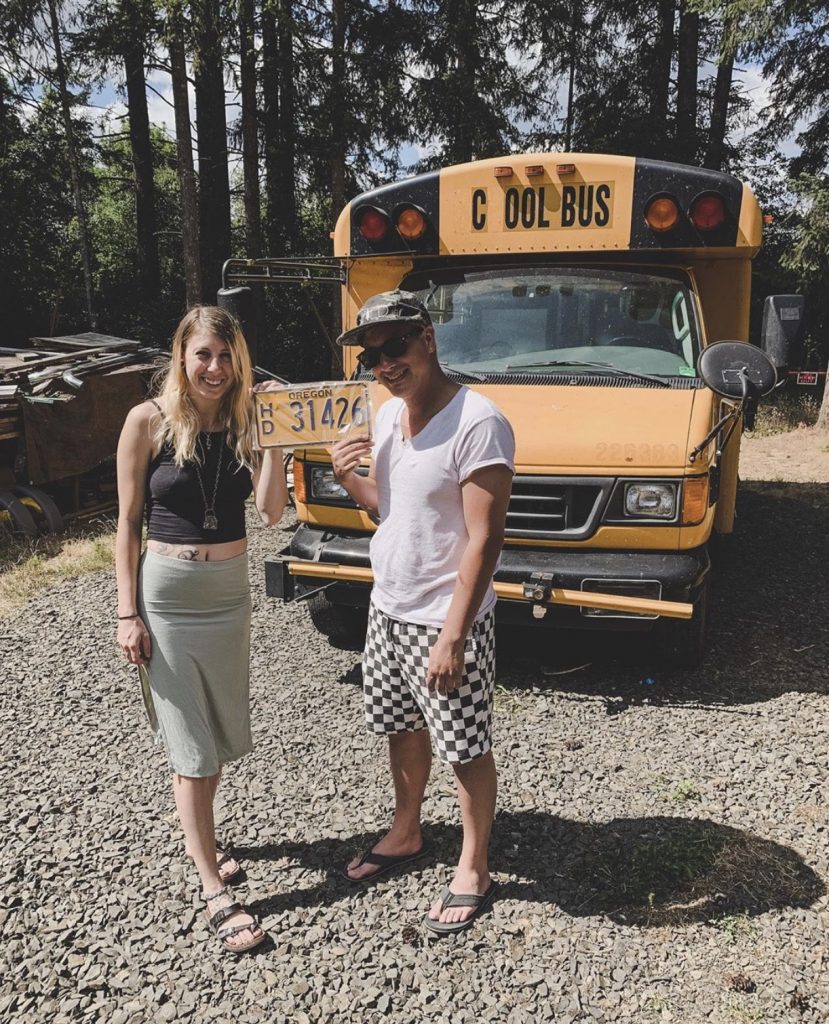 What is the year, make, model, size, etc. of Skooliana?

What was the total cost of your build? Was there anything you wish you had or could change if you were to do it all over again?

The total cost of the build was approximately $15,000. If I could change one thing about our mini skoolie, it would be the layout of our closet spaces. We’d shorten them down so they don’t completely block off the entire back. That way, we could have a more open feel. 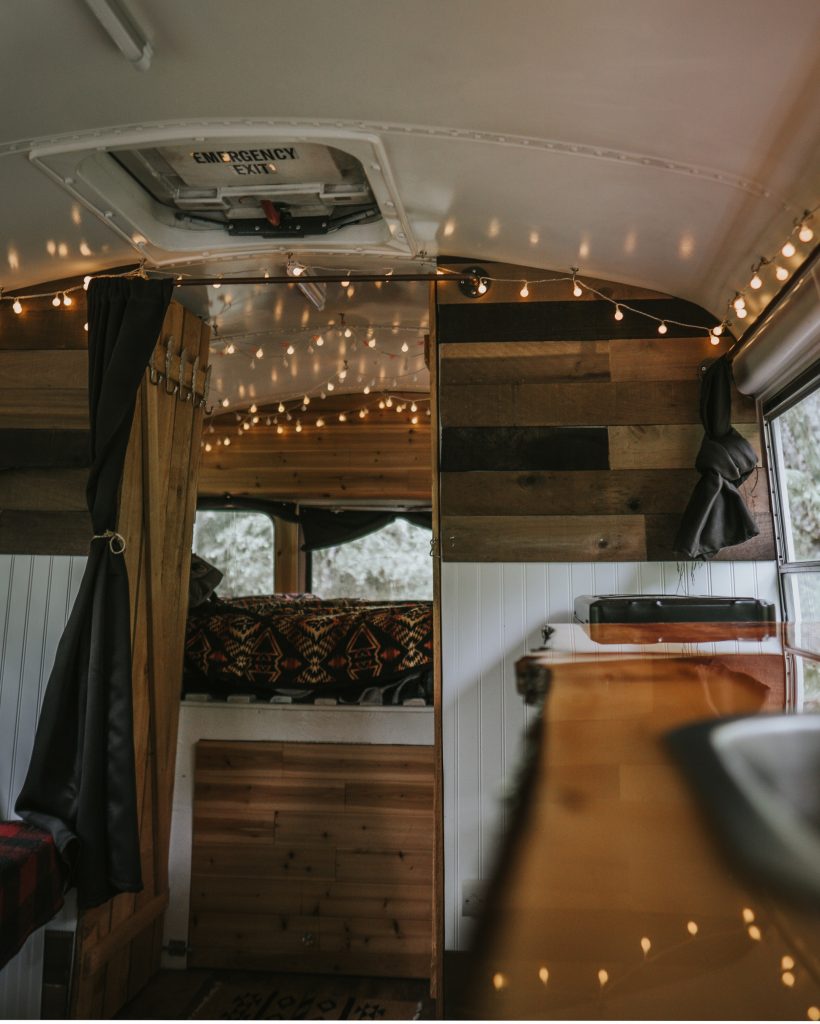 What do you do for a toilet and shower? Would you have changed this set up in your build if you could?

As far as a shower goes, we have an outdoor Mr. Heater Basecamp BOSS-XW18 shower system (You can go on there website and get a 20% discount with the code: SKOOLIANA20). It’s lithium battery operated and has a propane heating system attached. We love it. It works for us.

We honestly like our shower/toilet set up the way we have it because of how simple it is. We don’t have to worry about dumping a cassette toilet or about a shower causing too much moisture on the inside of the bus and we still have all of our space and amenities.

One of our favorite features of your mini skoolie build is the live-edge countertops. How many coats of epoxy did you use to make it? How has it held up?

That has to be our favorite feature, as well! I actually bought that countertop off the side of the road for $30! It took me a full day of sanding and overall about 5 coats of epoxy! We were kinda in a rush during our build process and we should have waited longer during the drying process between coats but overall it’s held up pretty well! Would 10/10 recommend trying out!

How’s the storage on your mini skoolie conversion? Do you feel as though you have enough or that you had to compromise?

We built our mini skoolie the way we did just for storage purposes. We have plenty! Isaac is a musician so we literally built storage big enough to cart around all of his music gear, our snowboards & some!

Where are you both from? How did you meet? What drew both of you to life on the road?

I (Julie) am from Fort Lauderdale, FL and Isaac is from Newberg, OR. We’re from completely opposite sides of the country.

How we met is kind of a crazy story! I was on a road trip with my sister for her birthday when I had met Isaac at Umpqua Hot Springs (my first hot spring ever) and it was actually Isaacs’s first time at Umpqua himself! We hung out and kinda just hit it off. I finished out my road trip with the sister, came back down to Oregon to visit Isaac, and never left.

I’ve always had the itch to travel. I hated being stagnant in one state. I wanted to explore more than ever. And what better way to do it then literally living on the road! I was previously on the road living out of a Toyota Venza with a friend prior to meeting Isaac and had fallen madly in love with the nomadic lifestyle. Isaac was pretty much losing his housing overnight and that’s where the G20 was born. He didn’t want to pay for rent and just waste money, so he decided to build a forever tiny home on wheels!

What are you guys doing for work on the road?

Isaac is a full-time Cameraman, Videographer, and Photographer (I’m by his side helping 99% of the time). I also make custom furniture and jewelry on the side. We also have recently got into doing builds (Box Truck on the way, so stay tuned)! 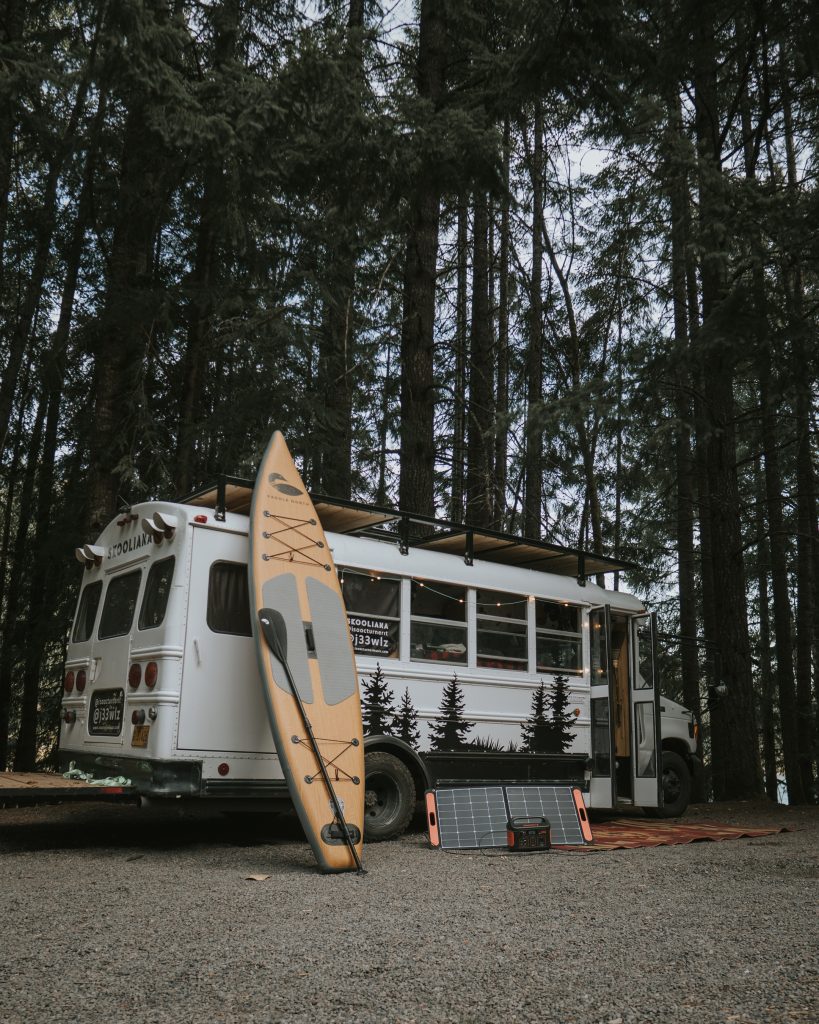 What are some challenges that you face while living on the road?

There really isn’t any, to be honest. Living the nomadic lifestyle is literally the bomb dot com. We would recommend anyone that’s hesitant to jump in and try it! It’s life-changing.

Want to keep following Jules & Isaac and their mini skoolie?