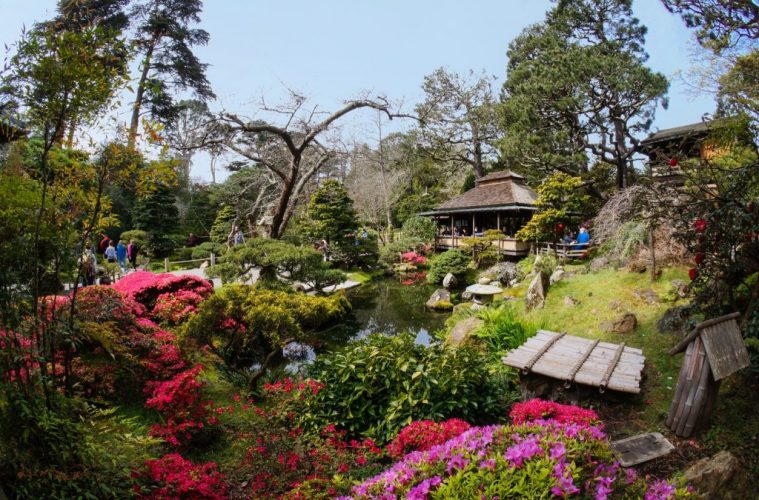 What Makes The Japanese Tea Garden In San Francisco Special

The Japanese Tea Garden in San Francisco is one of the most popular features in San Francisco’s Golden Gate Park in California. It features 5 acres of land with various Japanese-inspired styles of paths, koi ponds, trees, plants, sculptures, buildings, and, of course, a tea house that’s located in the central part of the garden.  It has become known as the oldest public Japanese garden in the United States!

When Is It Open/How Much Should I Plan On Paying? 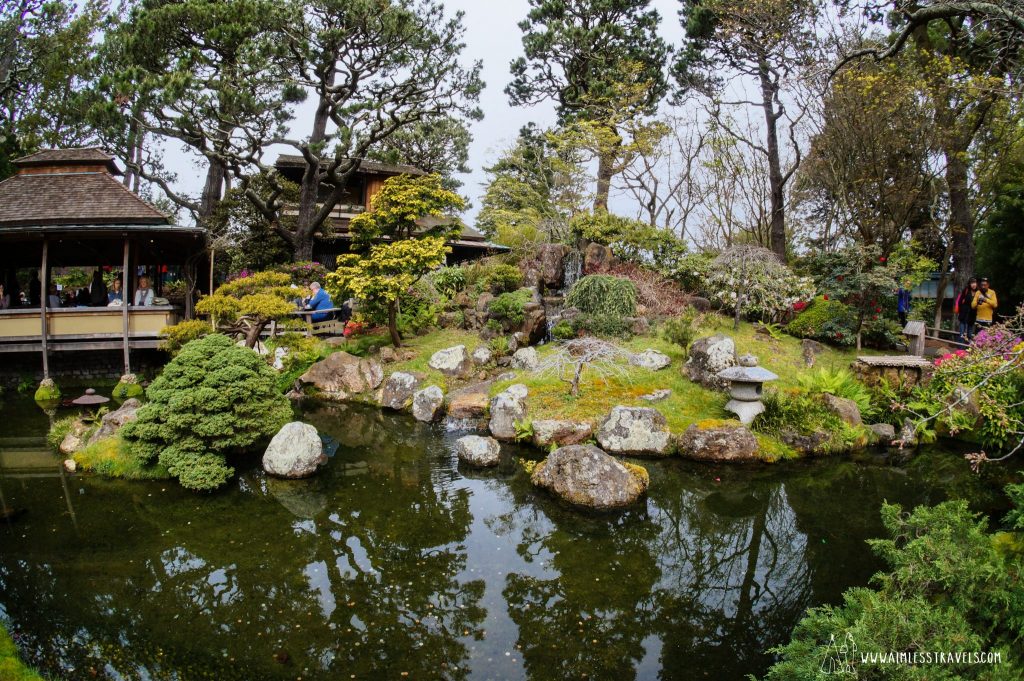 Some bad news: It does cost money to enter. It is $9 for adult non-residents of California. It is $6 for senior and youth non-residents. If you are a San Francisco resident, it’s only $6 for an adult ticket. it is If you are looking for ways to save that money, or maybe use it for a cup of tea, Mondays, Wednesdays, and Fridays before 10 am are free admission!

Make sure to arrive early in the day, as parking and traffic can be a nightmare during the afternoon.

The Backstory Of The Japanese Tea Garden in San Francisco

This beautiful garden was originally built in 1894 as a feature of the California Midwinter International Exposition. After the World’s Fair was over, Makoto Hagiwara, a Japanese immigrant and gardener, was in charge of the modification of the Japanese exhibit. His goal was to create the Japanese Tea Garden in San Francisco as we know it today, where he imported plants, birds, and koi fish from Japan. 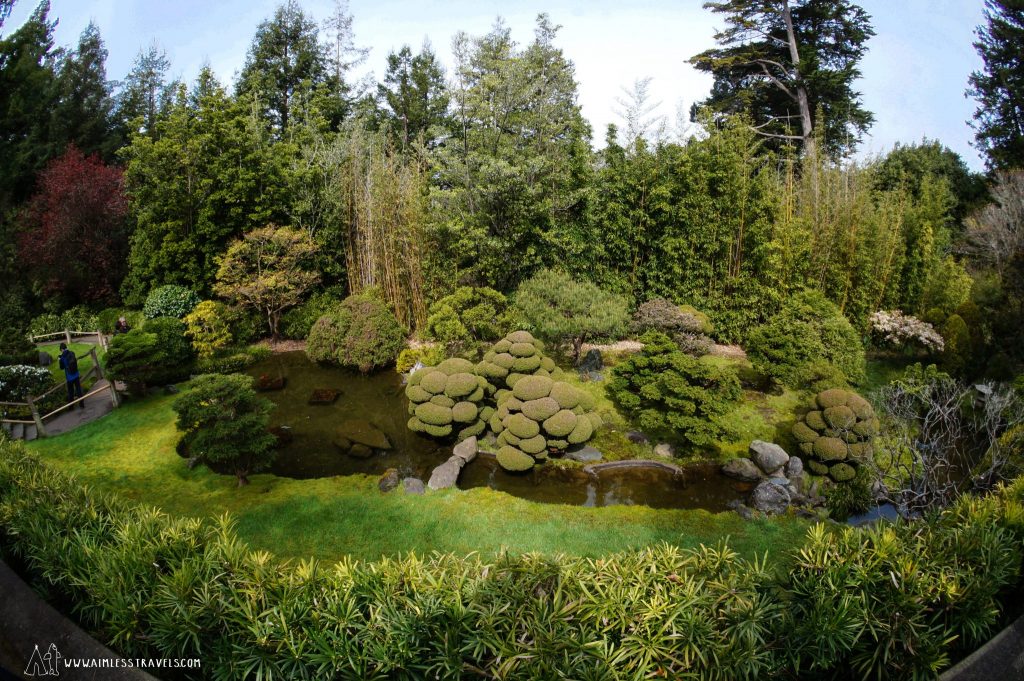 The care of the garden was passed on to his family after his death in 1925. This time in history was also the period of World War II where America became very anti-Japanese. Eventually, the Hagiwara’s were evicted from the property and many were put into internment camps. During the family’s absence, the garden was renamed “The Oriental Tea Garden”, any structures that resembled Japanese heritage were destroyed including the family’s home and the original Shinto Shrine, and the Japanese tea servers were replaced with Chinese women.

The Japanese Tea Garden in San Francisco regained its name after the war in 1952 and the Hagiwara family was allowed to continue to assist in the maintenance of the garden. Donations came pouring into the garden, including a bronze Buddha in 1949 and a 9,000-pound Lantern of Peace in 1953. The bronze Buddha came from the Gump family, while the Lantern of Peace came from small donations made by the children of Japan after the Japanese Peace Treaty was signed in San Francisco in 1951. Around the same time, Nagao Sakurai, a landscape artist from Tokyo, designed a Peace Garden and a Karesansui, which is also more commonly known as a Zen Garden. 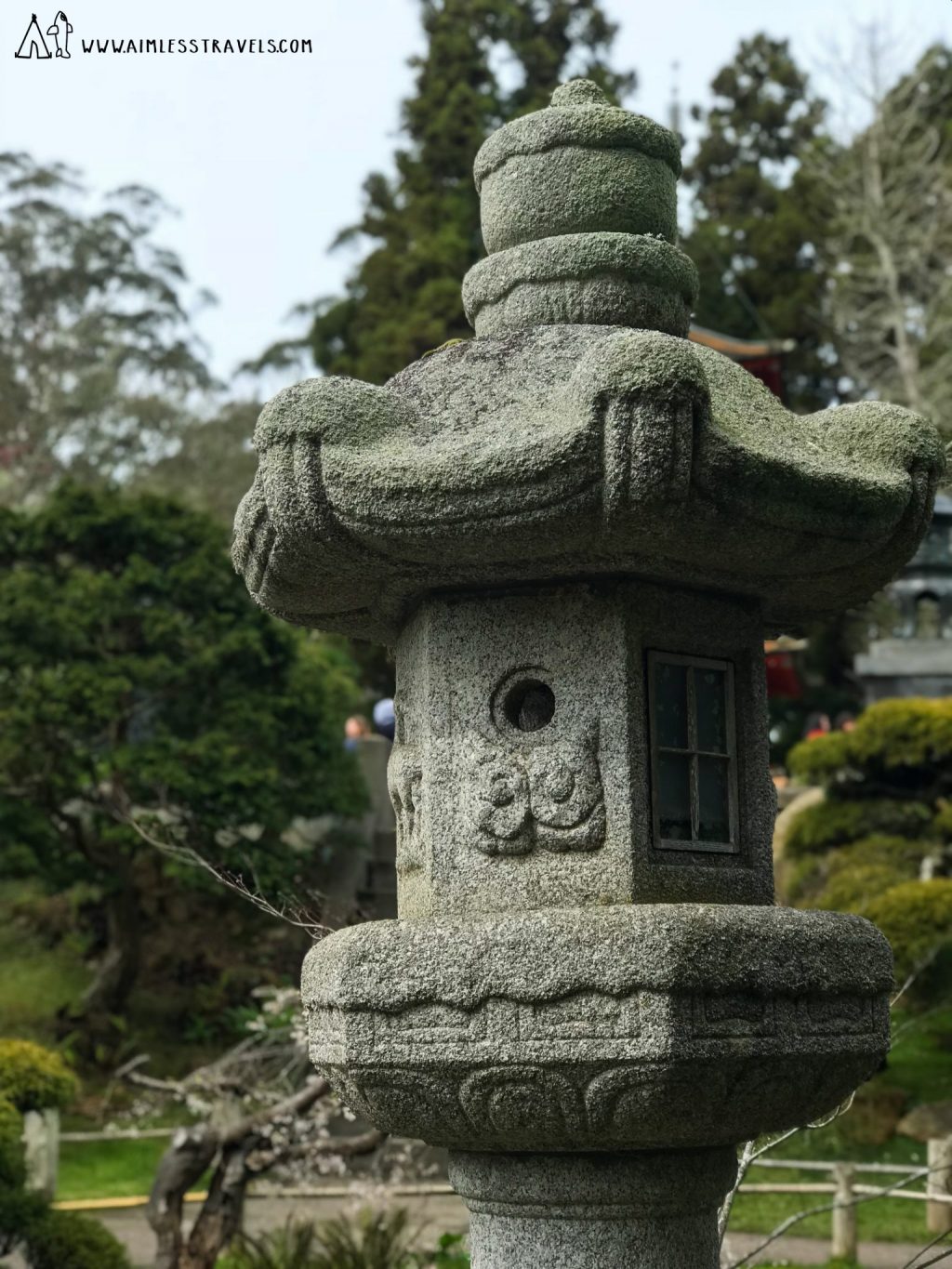 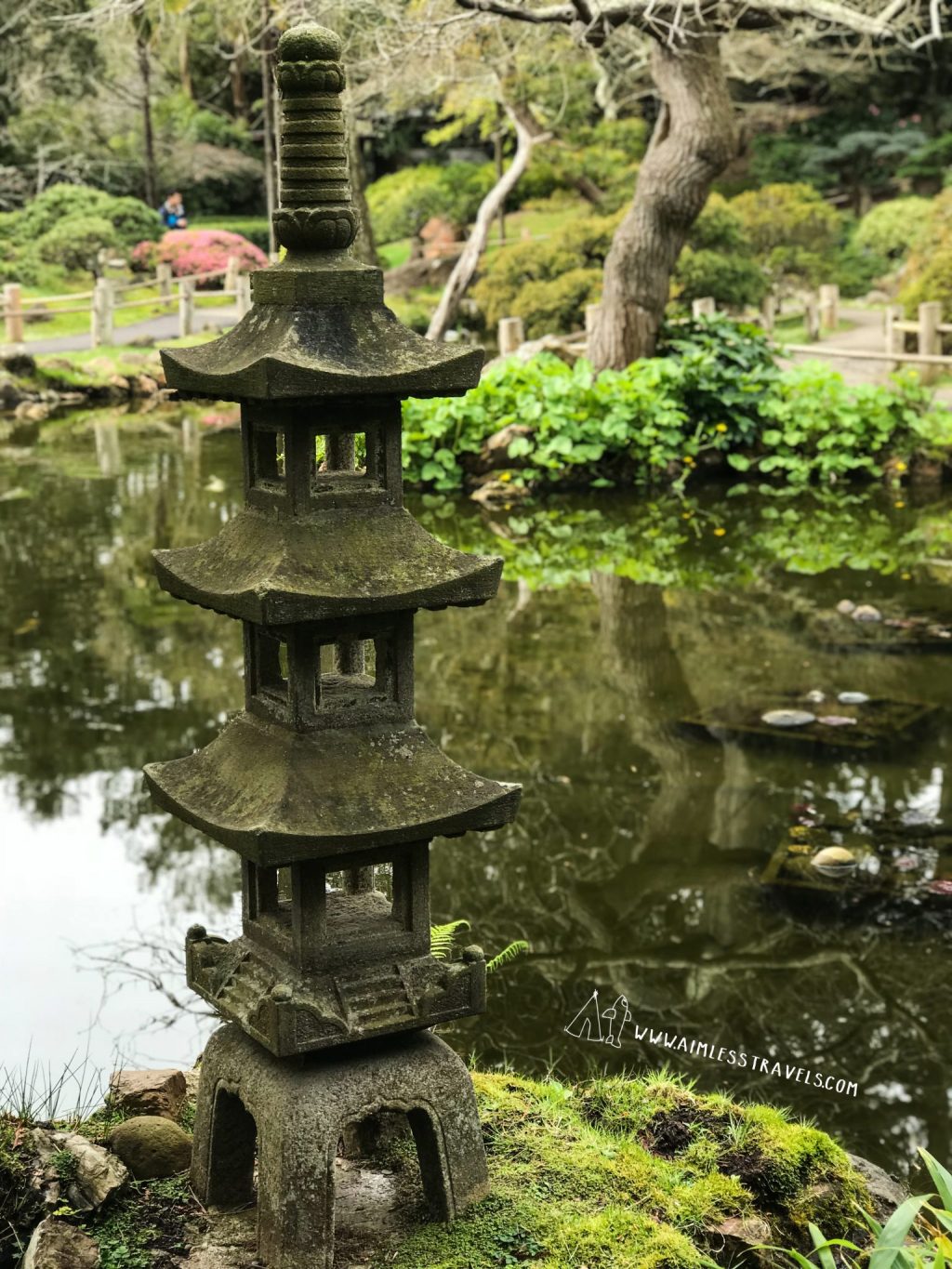 Where Does Religion Come To Play In The Garden?

Japanese Tea Gardens are places of sacred rituals. They’re meant to represent Japanese religion through the art created by the landscaping and architecture. In the Japanese Tea Garden in San Francisco, you’ll be able to see Buddhism, Shintoism, and Taoism religion in its design. These religions all emphasize the importance of being one with nature. To do this, everything in the garden is placed in a specific way to establish a feeling of flow, relaxation, and peace. 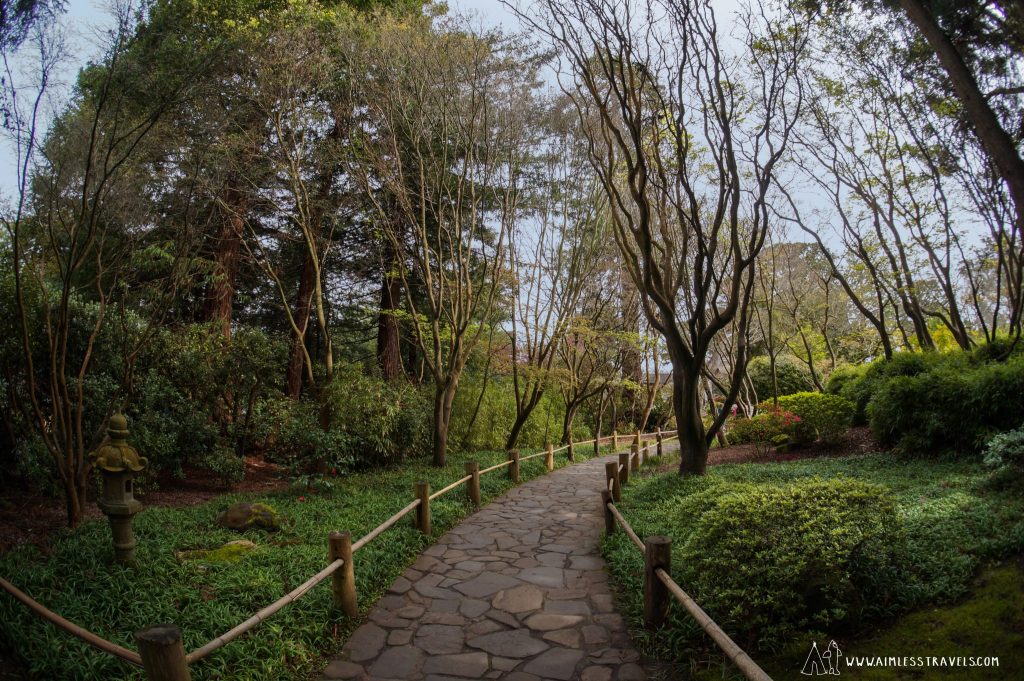 The flow represents Taoism and can be seen through the placement of rocks, trees, and paths. 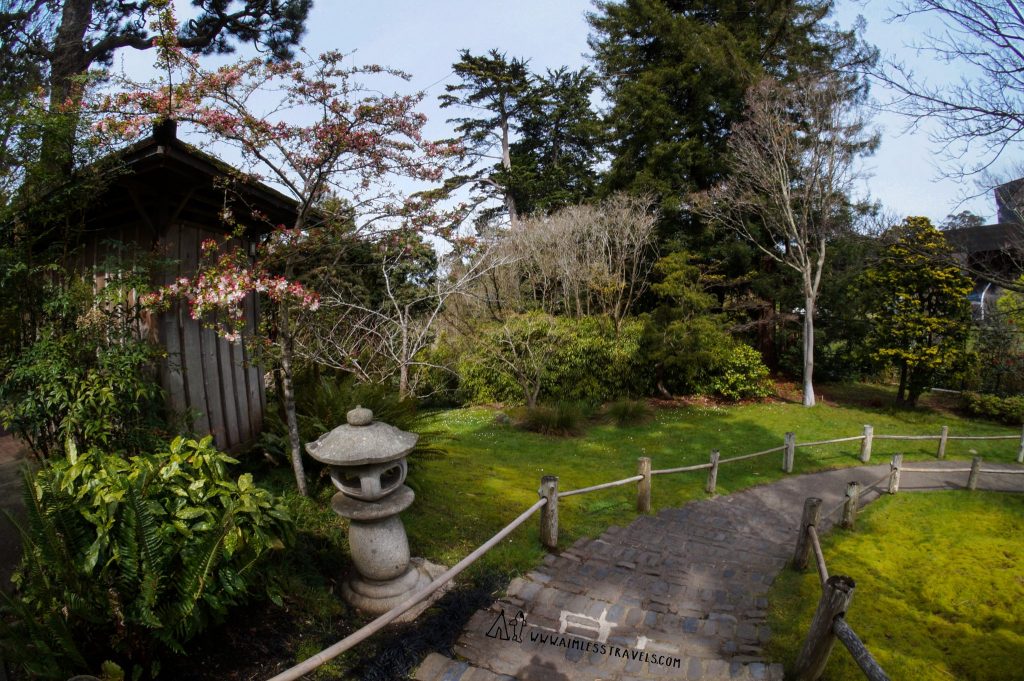 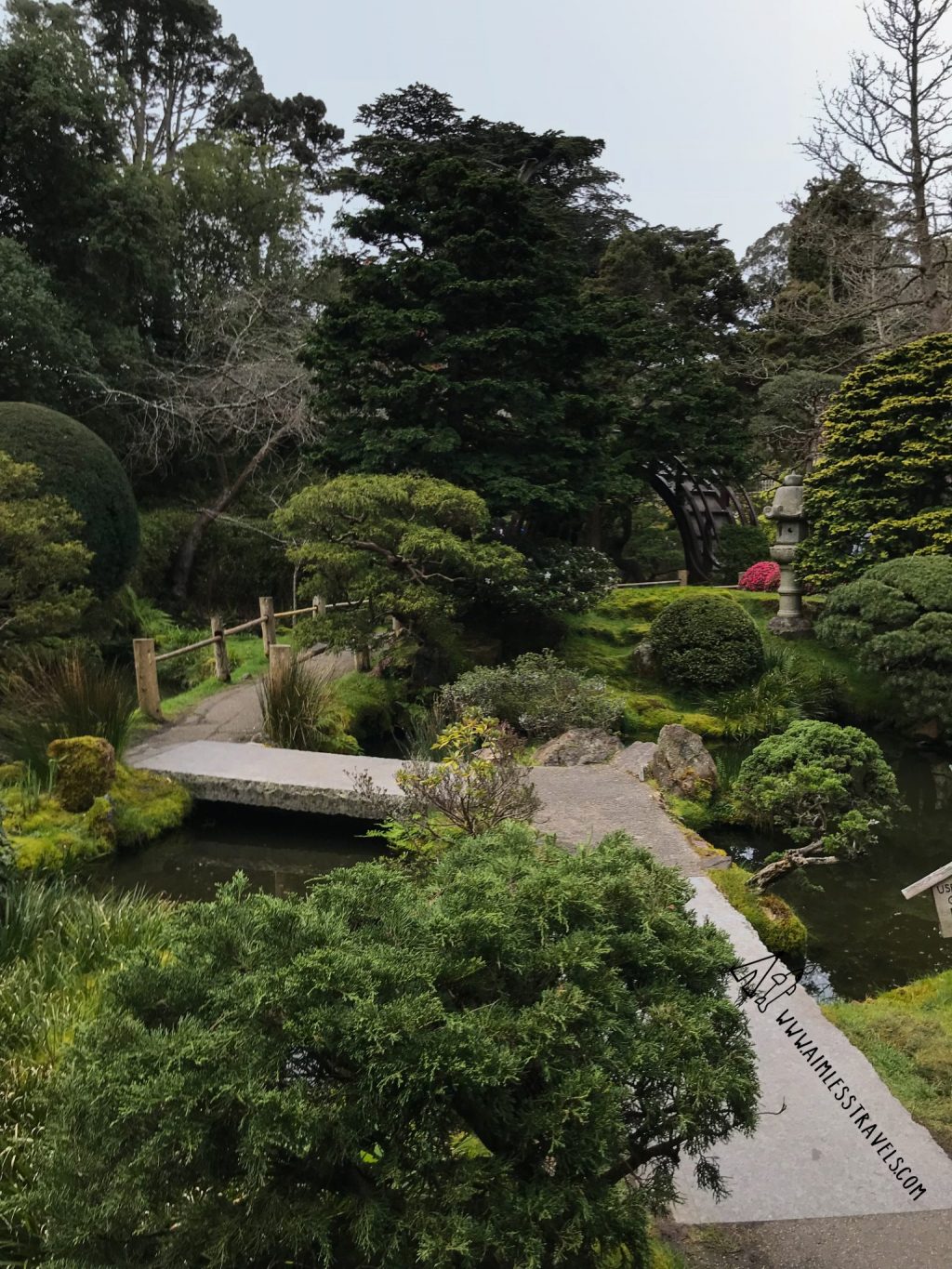 The beauty of nature and cleanliness seen throughout the garden is meant to impress the Shinto spirits, known as Kami. 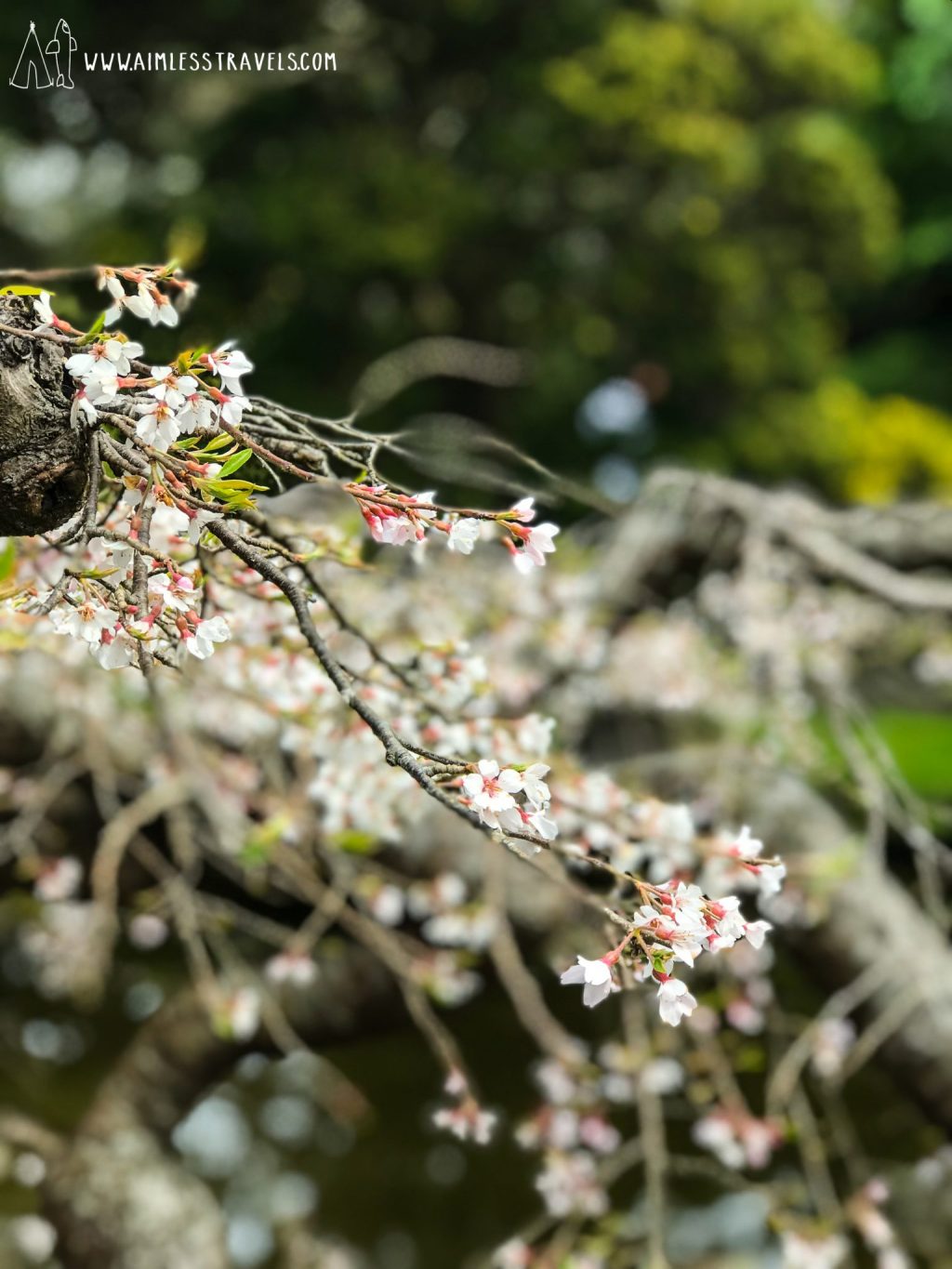 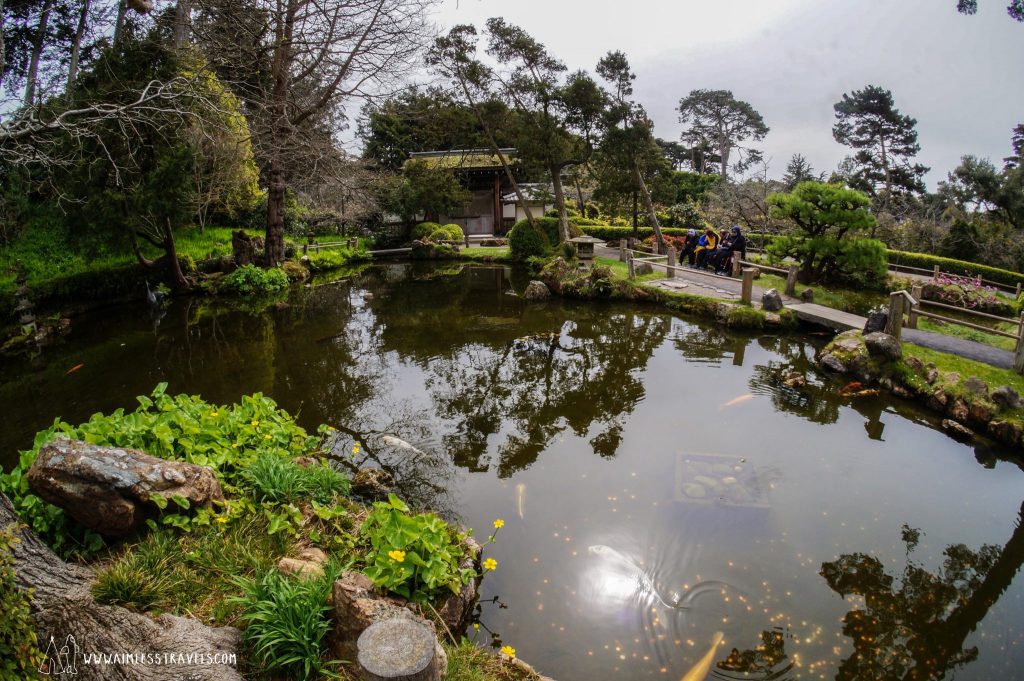 Buddhism is represented through the Japanese Tea Garden in San Francisco’s sense of Zen. For example, in the Buddhist religion, it is believed that stairs are a great source of meditation. As a result, the garden incorporates stairs into their garden to promote Zen to their guests. 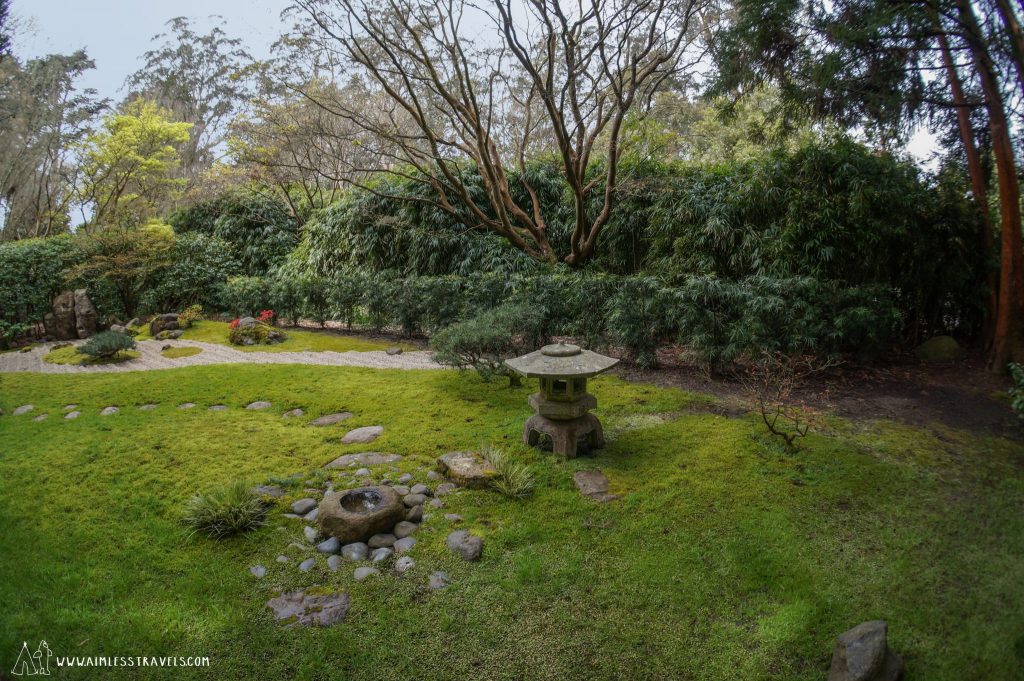 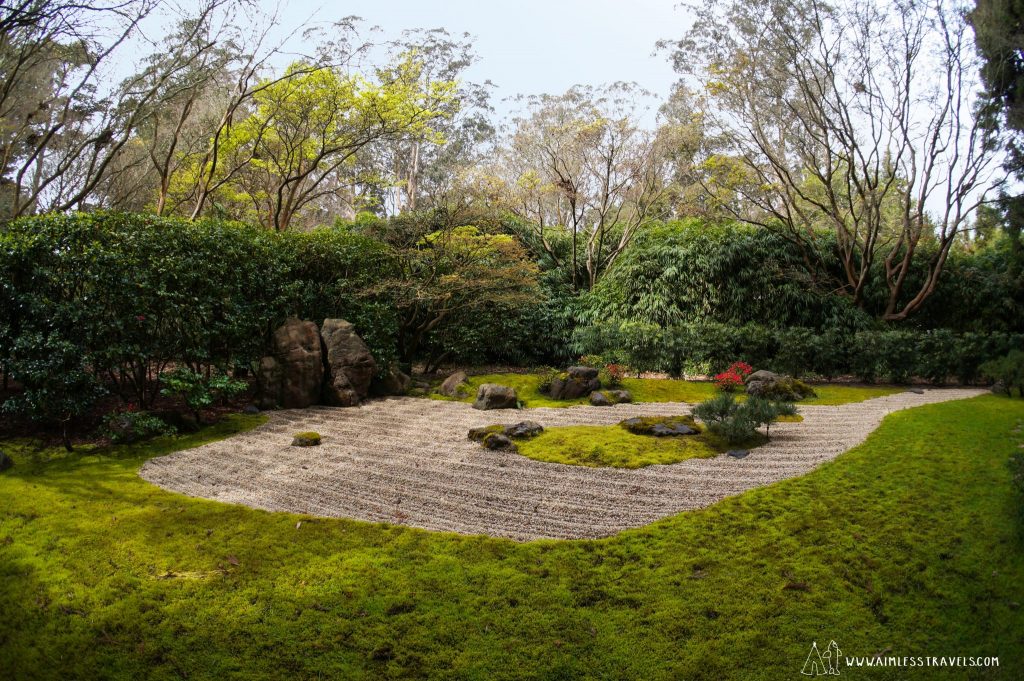 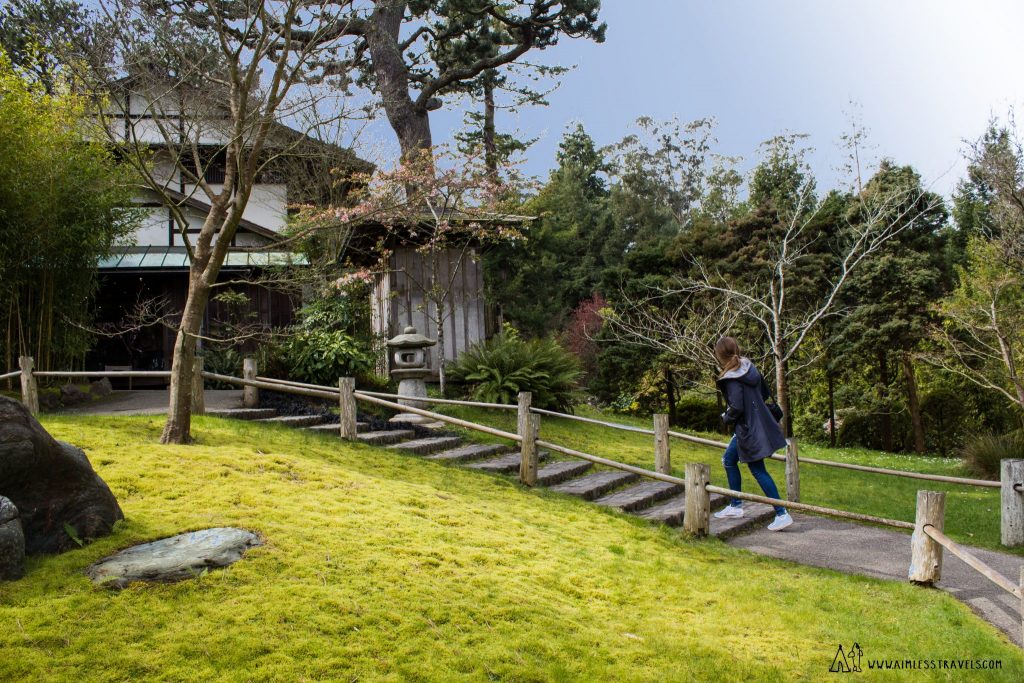 What Can You Expect To See?

The Tea House is located in the central part of the Japanese Tea Garden in San Francisco and can be seen as soon as you enter. Located by the water, you are able to see a variety of views of the landscape from the house. The tea house is also open daily.

Their menu currently offers four types of teas: Sencha, Genmaicha, Hojicha, Jasmine Tea, and Iced Green Tea. They range anywhere from $3.75 to $4.95 for a cup. They also offer other options such as Matcha, other kinds of beverages, snacks, and treats. Yum! 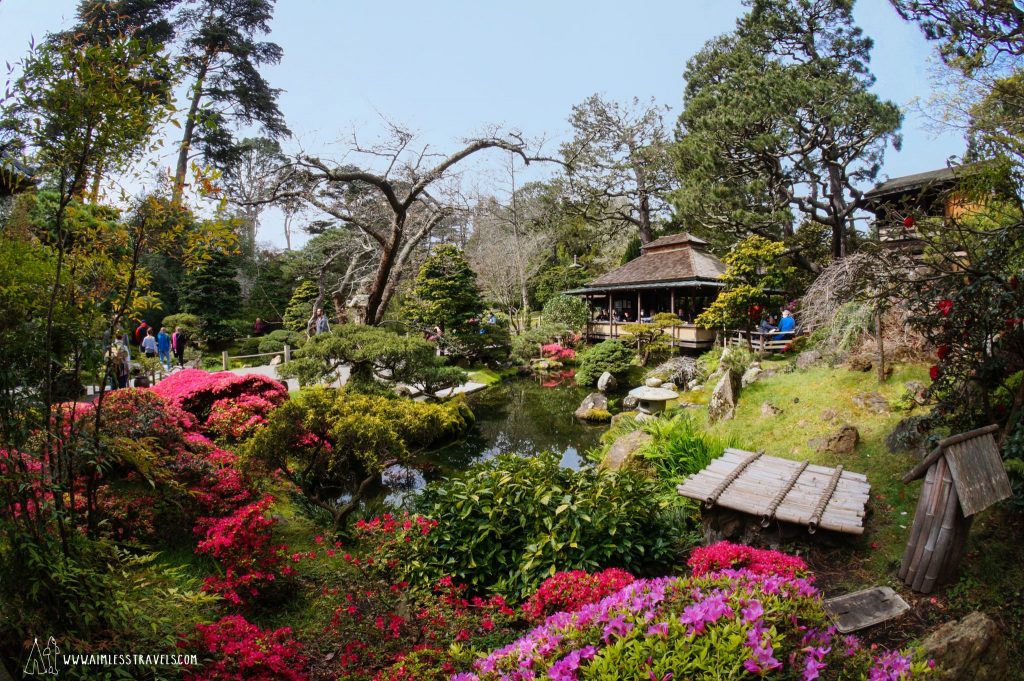 Influenced by the Buddhist religion, this pagoda is a five-story high shrine that was used by the people for worship. The multi-level roof style of pagodas is used in India and Asia as a tomb for high-ranking Buddhist monks. Interestingly enough, this pagoda at the Japanese Tea Garden in San Francisco now stands where the Shinto originally stood, which was demolished during WWII. 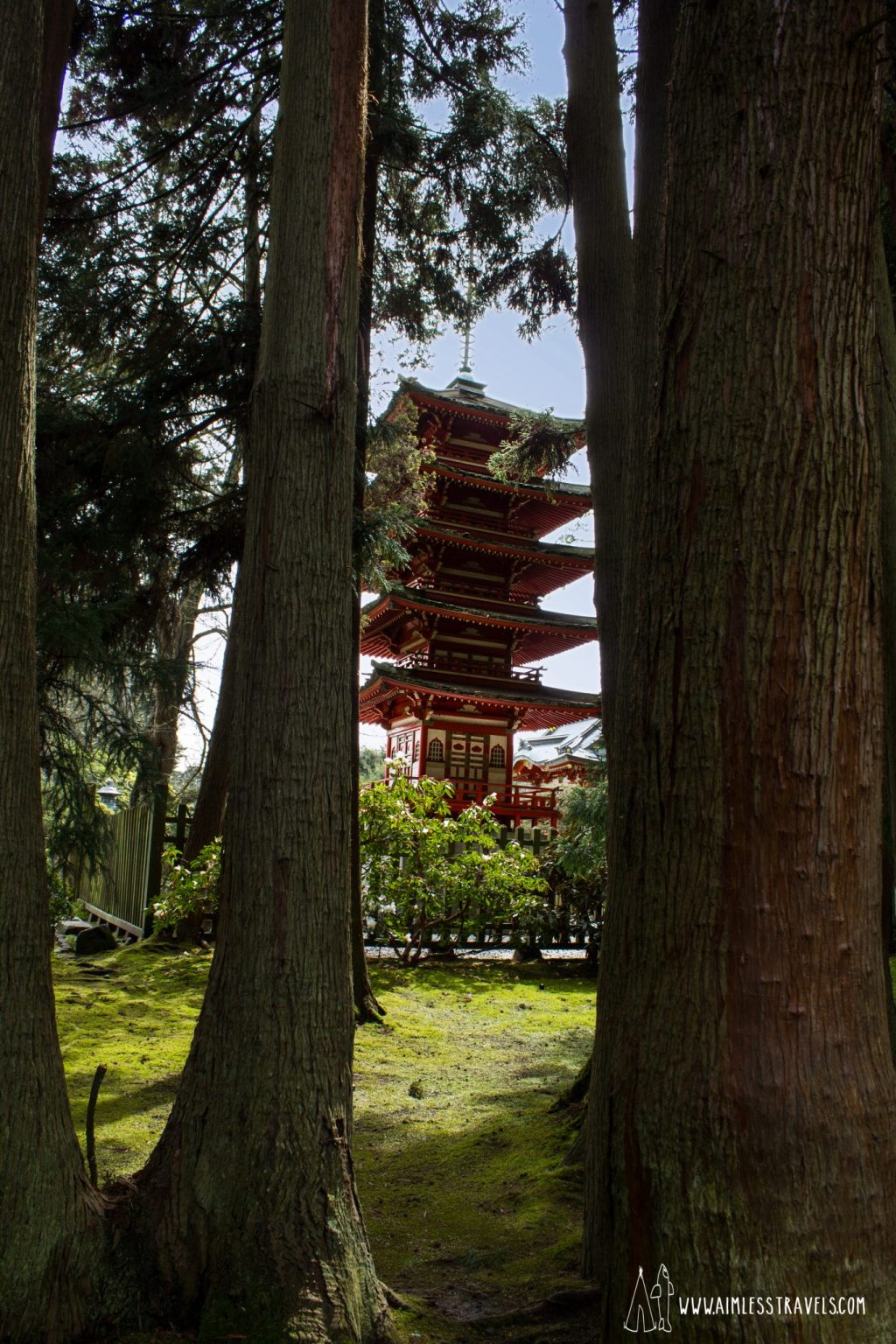 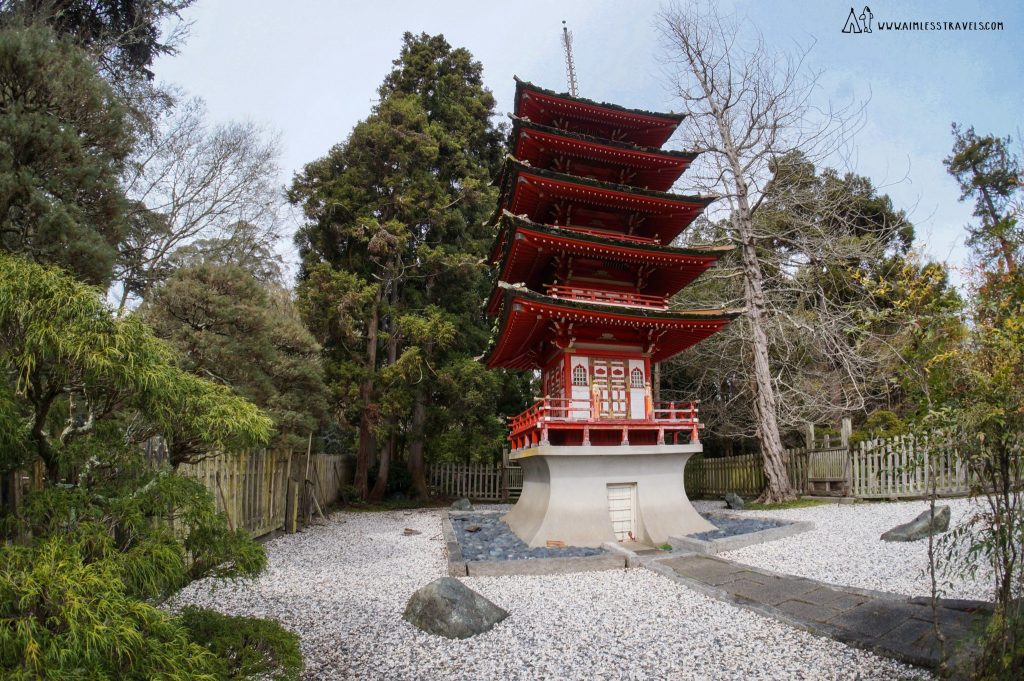 These types of bridges are also known as taiko bashi. They are an arched bridge that is most commonly found in both Chinese and Japanese gardens. These styles of bridges function slow people down. They create a state of mind for tea ceremonies, as well as let barges pass through the canal without hitting the bridge. When the bridge is reflected on the water, the circular shape resembles that of a drum or moon.

The Drum Bridge was built and designed in Japan by Shinshichi Nakatani. He dismantled it and brought it back to San Francisco, where he donated it after the 1894 Fair. This was personally one of our favorite parts of the Japanese Tea Garden in San Francisco! What’s even more exciting is that they let you actually climb over it. Definitely an experience worth trying! 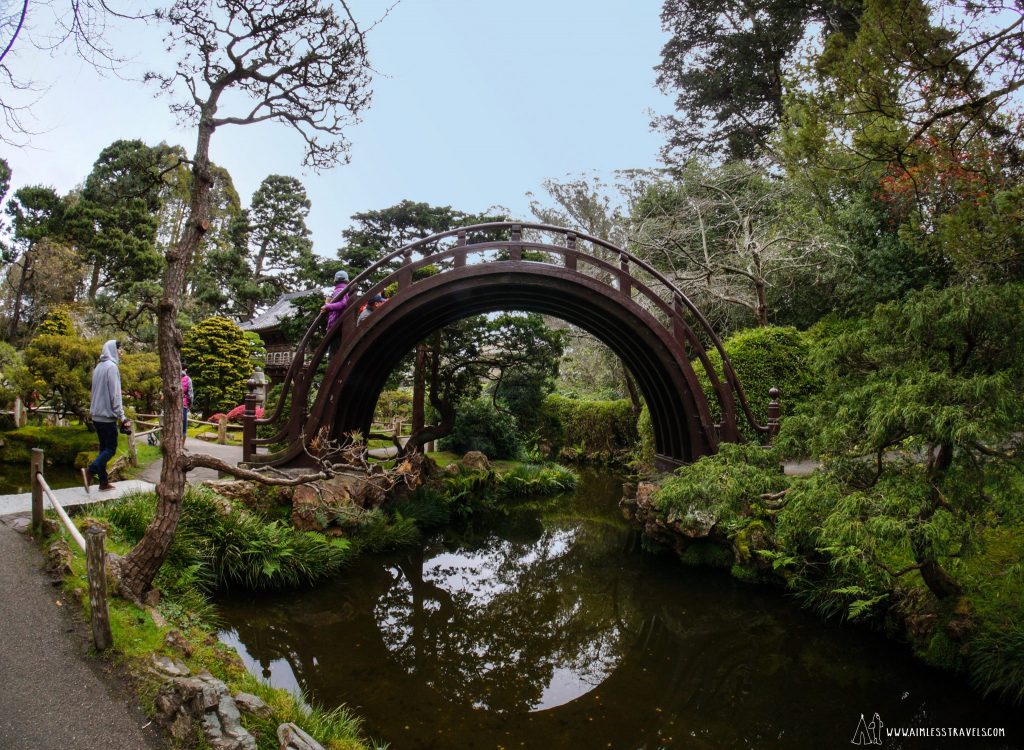 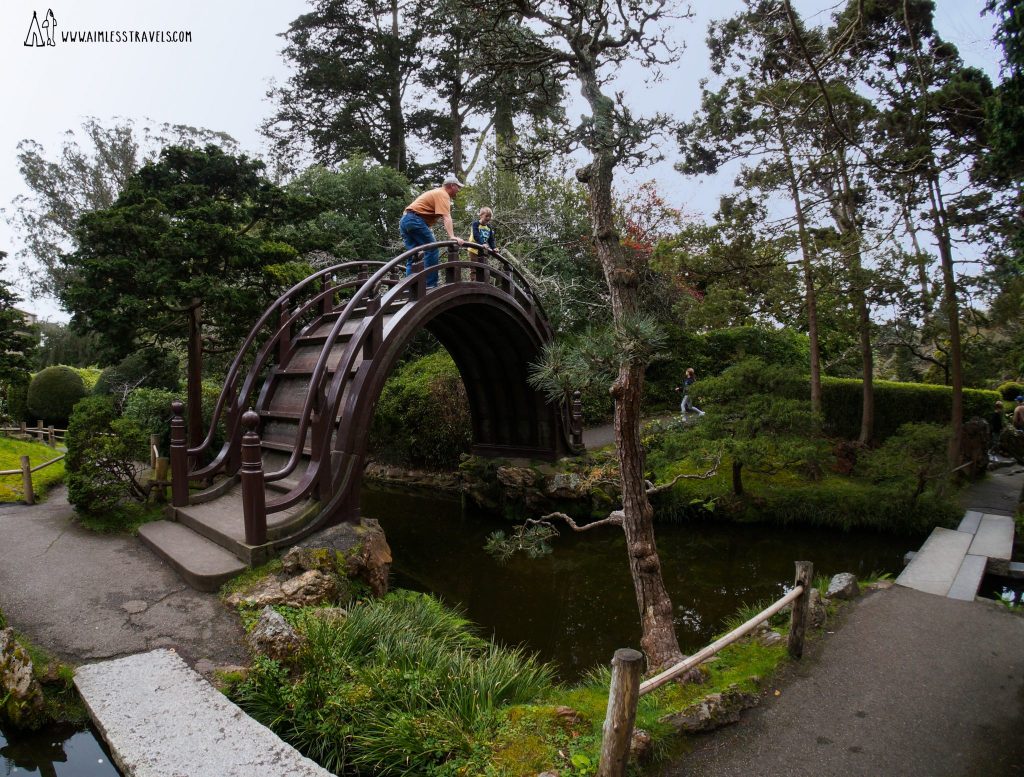 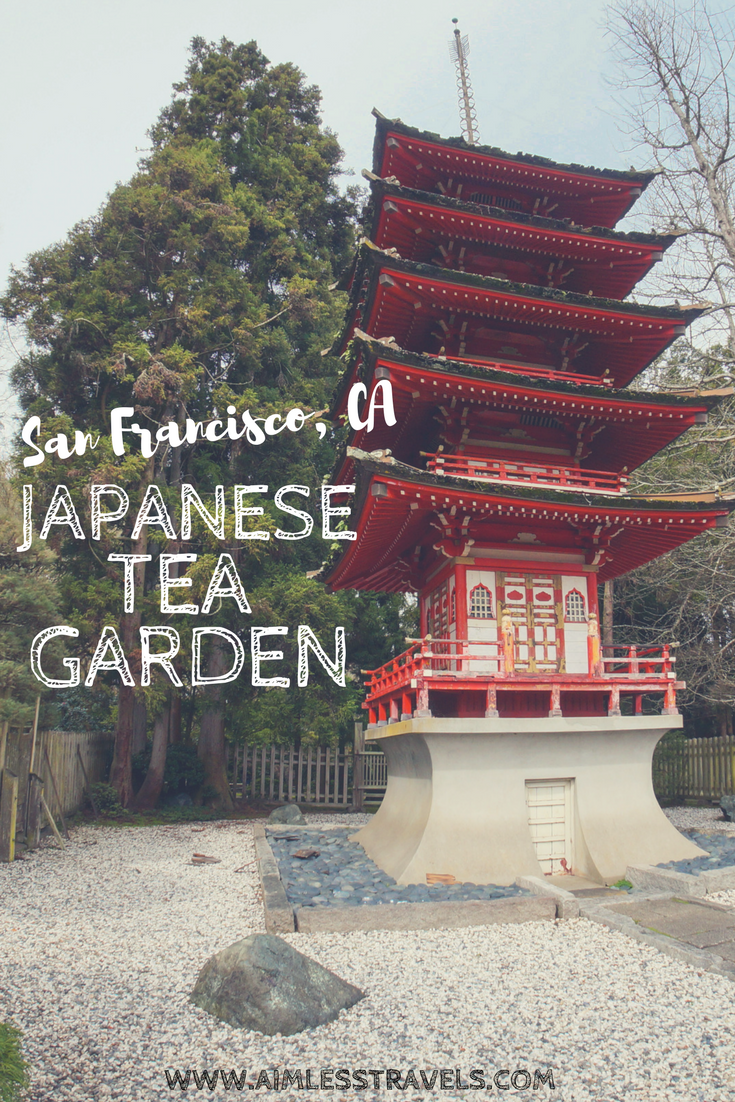